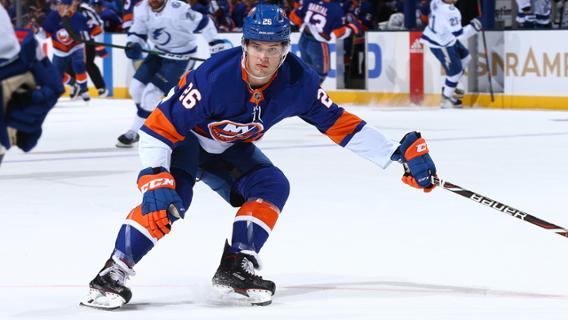 Possibly the most intriguing matchup of the play-in round in the 2020 Stanley Cup Playoffs pits the Toronto Maple Leafs against the Columbus Blue Jackets. It features a team that struggles in the playoffs and one that won a playoff series for the first time in 2019. A team with a bunch of superstars and a team that lost a bunch of superstars. The almost polar opposite dynamics of these teams will make this series one of the best of the play-in round.

On the offensive side, the Leafs have an obvious talent advantage. John Tavares, Mitch Marner, Auston Matthews, and William Nylander are huge pieces in that deadly top-six. Those four combined for 266 points over the regular season. That’s more than the Jackets’ seven-highest point totals combined. Outside of this foursome, the Leafs boast 21-goal scorer Zach Hyman, 39-point defenseman Tyson Barrie and 20+ assist getters Kasperi Kapanen and Morgan Reilly. Joonas Korpisalo and/or Elvis Merzlikins will have a tough challenge to keep the NHL’s third-highest scoring team off the board.

The NHL’s 28th-best scoring team has just two 20-goal scorers: defenseman Zach Werenski and forward Oliver Bjorkstrand. There are no 50 point scorers on this team in 2019-20 and Pierre-Luc Dubois is the only 30+ plus assist getter. Freddy Andersen will likely have an easier job in net, however, the Jackets could take advantage of Toronto’s defensive deficiencies.

With the Blue Jackets vs Maple Leafs series, the advantage is completely flipped when it comes to the blue line. The Blue Jackets have a deep and hungry defense core while the Maple Leafs have struggled to find consistency. Werenski and Seth Jones are two of the best young defensemen in the Metropolitan Division. Ryan Murray, David Savard, and Markus Nutivaara are solid options but the real key is Jack Adams Award finalist John Tortorella. Torts has his team playing tight defensively, allowing the seventh-fewest shots per game and the third-fewest goals against over their 70-game regular season.

As good as the Leafs offense is, their defense is one of the worst in the NHL. They finished 27th in goals against, only the Florida Panthers were lower among playoff teams. Outside of Jake Muzzin, they struggle to find defenders that are good in their own end. This is a team that tries to outscore its opponent every night.

Goaltending is interesting. Andersen is the most talented between the two teams but Korpisalo and Merzlikins have both hit hot streaks that can make them dangerous in a five-game series. Andersen has the experience, with mixed results since coming to Toronto. Neither Korpisalo nor Merzlikins has Stanley Cup Playoffs experience.

Vast differences in strengths and weaknesses boil down to an even looking series between the eight-seeded Maple Leafs and nine-seeded Blue Jackets. The difference will come in the will to win. The Jackets have that advantage. Toronto’s big guns have sizable contracts and elite skill but not a determination factor. A perfect example is the David Ayres game. Putting aside that they lost to a 42-year-old Zamboni driver that works for them, the Leafs put on just 10 shots in over 28 minutes of game time after Ayres came in. The first two shots went in yet the Leafs did not put shots on goal. There was little desperation, in the middle of a cut-throat playoff race no less, and Toronto lost 6-3. No, this was not a game played under Mike Babcock, this game was after the coaching change. The Leafs also got swept on their California road trip. Which was in March. Against three non-playoff teams. In a tight playoff race. Until we see a steep increase in the effort level of this team, the Leafs will never go far in the playoffs.

The Jackets have had all odds stacked against them all season long. From losing a number of stars to a pile of injuries, this team was time and again picked to fail. Instead, they played the hard-forechecking, gritty style of a Tortorella-led team and succeeded. This is a team that is not afraid to throw the body around and make life difficult for opposing teams on the breakout. Columbus can take advantage of Toronto’s lack of defensive talent with pressure in the offensive zone and cause turnovers. If the Jackets can keep the Leafs pinned in the defensive zone for minutes at a time, they can win this series.

When it comes to the Blue Jackets vs Maple Leafs series, I have the Blue Jackets winning in four. I think Toronto’s talent will grab them a game, this team is too good not to get at least one. However, I think that Columbus, in a similar situation as last season against Tampa Bay, can be aggressive and gritty to the point where it overpowers the Leafs. This series will lead to more fun jabs at the Leafs and strengthen the call for Tortorella to win the Jack Adams Award.