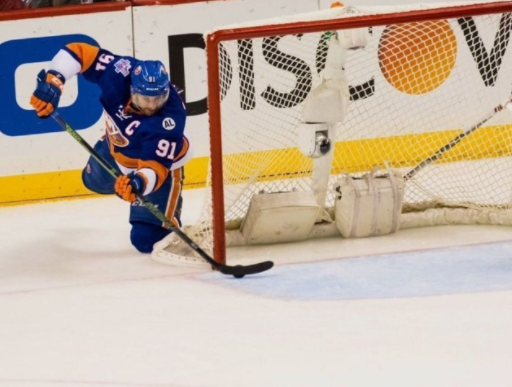 While the Islanders seem to be done with transactions until training camp, the team still has one more obstacle to clear before the season begins.  They are yet to extend John Tavares’ contract.  When asked about the situation, Anders Lee said “I’m not worried about Johnny [returning] in the slightest. He means everything he says, and he’s a great teammate and a great player and leader. He’s the captain of our team and I don’t expect that to change.”  As easy as returning may sound, the Islanders need to work with the cap to get a deal done, and for a player like Tavares, they will need to use a lot of it to make him want to play in New York.  Still the question remains; how much money will Tavares actually make?

Over the past few years, it seems as though new teams are emerging as Stanley Cup contenders.  Teams like Los Angeles, Boston, Vancouver, and  the New York Rangers are nowhere near as good as when they were competing for the Cup a mere few years ago.  In this short time period, the salary cap has changed dramatically.  When Boston won the Cup in 2011, almost all of their cap space was used.  Only Brad Marchand and Tyler Seguin were on entry level contracts.  Many of their key contributors were getting paid greater sums of money.  This year Pittsburgh won the Cup with only four players making more than $5 million per season.  They also had seven players on two-way contracts including Jake Geuntzel, Conor Sheary, and Brian Doumolin.  Additionally, their third highest paid player, Kris Letang, did not play the entire playoffs.  As teams begin to compete for the cup, they do so in a new way, and that starts with getting production out of players on two-way contracts.  A winning team pays high salaries to about 3 or 4 star players and fills out the rest of the roster with cheaper depth players who are capable of playing with high-end talent.

This summer, the league watched as the Edmonton Oilers inked both Connor McDavid and Leon Draisaitl to 8-year extensions.  Starting in 2018-2019, McDavid will make $12.5M per season while Draisaitl’s new $68M contract kicks in immediately.  While most hockey fans were shocked by the amount of money these players will be making, they probably felt similarly when Crosby and Malkin signed $8.7M (not including bonuses) and $9.5M contracts, respectively.  While the Oilers seem to be getting the short end of the stick, the Penguins actually paid a relatively higher price for their two stars.  When Crosby signed his contract in 2007, it accounted for 17.3% of the Penguins salary cap.  Malkin’s deal accounted for 15.3%.  When McDavid signed his new deal, it accounted for only 16.7% of the Oilers cap and Draisaitl accounts for only 11.3%.  The salary cap has grown since the Penguins locked up their two superstars, allowing teams to pay more money to star players.

That begs the question; With the salary cap where it is today, how much does John Tavares deserve to make?

Tavares is the best player for the Islanders.  He did have a “rough” year for his standards, only scoring 66 points in 77 games played.  However, over his career, he has 537 points in 587 games played.  He has been able to be a near point-per-game player his entire career thus far, and with a favorable coaching change and the addition of Jordan Eberle to his line, he can once again be in the running for the Art Ross, or even the Hart Trophy.

A player fairly comparable to Tavares is Claude Giroux of the Philadelphia Flyers.  Tavares is most certainly better, but when Giroux signed his contract in 2013, he was playing similarly to how Tavares is now.  He, like Tavares, had a down year in 16-17, but is more than capable of being a point-per-game player.  In 2013, the salary cap was $60M, but teams were allowed to spend $70.2M.  When Giroux’s $8.75M AAV contract started in 2014, it was worth 11.25% of the Flyer’s total salary cap.  They would later be able to sign Jakub Voracek to a similar contract as they had a few aging player on their roster with contracts set to expire.

The Islanders’ situation is a little more complicated.  Nikolai Kulemin, Thomas Hickey, Dennis Seidenberg, Jaroslav Halak and Jason Chimera will all be UFAs next summer and will likely not return.  The team will likely also make trades to create cap space, enabling the Islanders to re-sign Josh Bailey, Brock Nelson, and Ryan Pulock.  Afterwards, the team should have about $10-$12M to sign John Tavares.  A $10M deal would be 13.2% of the expected 2018-2019 salary cap, accurate for a player of his caliber.  Once the team gets him signed, they will be able to draft and/or sign players to play with him, trade them for more picks and do it again.

As the league begins to adopt the principle of “interchangeable players”, the Islanders seem to be behind the curve as they have dished out expensive contracts to underperforming players like Andrew Ladd and Nikolai Kulemin.  In fact, Cal Clutterbuck and Casey Cizikas are paid more than players like Josh Bailey and Brock Nelson.  Contracts like those can send a team back multiple years in its development and can hinder their chances at a Cup.  Once Tavares is signed, management can hopefully follow the leads of Edmonton and Pittsburgh and put the team back on the road to a championship.

Thank you for reading! Check out our podcast below!