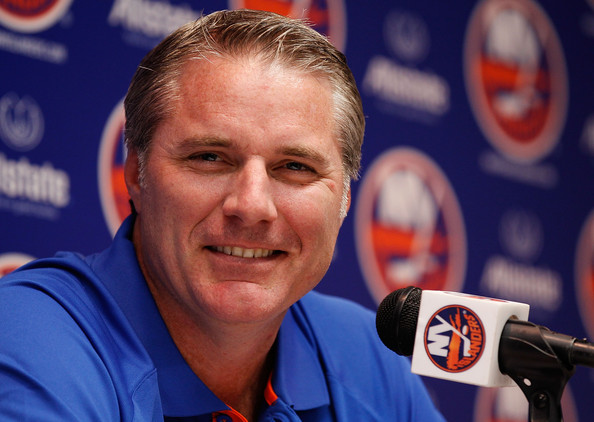 With all of this talk about Garth Snow recently, I have decided to share the story that many Islanders fans do not know about how he became the General Manager of the Club in one of the weirdest and wackiest offseasons in NHL history.

The Islanders had a pretty strong roster for the ’05-06 season. They had strong players such as Alexei Yashin, Trent Hunter, Miroslav Satan, and All-Star goaltender Rick DiPietro. Mike Milbury was still the GM, going strong in his tenth season. The team hadn’t missed the playoffs since the 2000-2001 season. Steve Stirling was behind the bench for his 2nd season as the coach of the Islanders. The season was a .500 season going into the Christmas Break, but on January 10th, the Isles lost eight out of their last nine going back to Dec. 26th. Steve Stirling was fired, and Mike Milbury resigned, but would stay as GM until the end of the season. The Islanders had used 40 different players during that season.  Brad Shaw was named coach, and the team missed the playoffs for the first time in 4 seasons.

The Islanders had used the most players of any of the NHL teams. 40 freaking players. That is a crazy number to imagine in the modern NHL. Garth Snow retired after the season after playing his final game: a rehab start for the Sound Tigers in which he won. The Islanders looked for a new GM and coach, and Charles Wang hired Ted Nolan to be the head coach of the Islanders. He had also hired Neil Smith, the architect behind the Rangers ’94 Cup team. Smith had been working with TSN and ESPN after being fired by the Rangers in 2000. Neil Smith played in the minors in the 70’s and 80’s and was drafted by the Islanders in the 1974 draft in the 13th round after playing college hockey at Western Michigan. He had worked in the Islanders organization in the early 80’s before going to Detroit to be the Assistant GM, where he led their AHL club to multiple Calder Cups. Smith then went to the Rangers. There, he rebuilt a struggling franchise basing his team on skilled players like Leetch, Richter and signing Mark Messier, and Alex Kovalev. The Rangers won the cup in ’94. The Islanders knew that they had someone who knew what he was doing.

Smith’s first decision was in the 2006 NHL Entry Draft. The Islanders had the 7th overall pick, and he selected a young kid out of Minnesota: Kyle Okposo. Okposo was not in the top 10 in the North American Skaters section from NHL Central Scouting. Smith selected many future Sound Tiger stars as well, including Jesse Joensuu, Robin Figren (who was picked two spots before Cal Clutterbuck) and Rhett Rakhshani. Then came the free agency period. Smith signed some good pieces to add to an Islanders team to make them contend: Brendan Witt, Tom Poti, Richard Park, Chris Simon, Mike Sillinger and Andy Hilbert. Meanwhile, down in Bridgeport, the Sound Tigers were coming off of an impressive season, making the playoffs, but ultimately losing to Wilkes-Barre in seven games. Bridgeport was in search of a new head coach, and Charles Wang didn’t have to go far to find his new coach. Little did he know, this little selection would change the fate of the organization.

Who is this guy?

On July 17th, 2006, in a press conference held at the Arena at Harbor Yard in Bridgeport, which was open to fans, there was Sound Tigers President Howard Saffan, Smith, and Charles Wang. Dan Marshall was named the 4th Head Coach in Sound Tigers history. Smith did not look happy during the entire Press Conference. Marshall was a player development guy, but he was never a head coach. He had no experience. Wang selected him because he was perfect in his mind, coaching for the Jr. Islanders running the team’s Rookie Camp. Many Sound Tigers fans were left befuddled with the selection. Marshall had started with the Isles down at the bottom, 10 years before. Sound Tigers Beat Writer Mike Fornabaio said; “Has he come out of nowhere? A little. Is this a surprising hire? Probably.” Marshall had spent the early ’90s as the team’s Head of Player Development for the Jr. Islanders. Then he went to the big club as someone who helped develop some of the young players at the time.

The next day, after the Presser in Bridgeport, Neil Smith was fired as the General Manager, and Garth Snow, who was the team’s backup goalie was named the General Manager, and thus began the era of Garth Snow. In the ’06-07 Season, Marshall led the Sound Tigers to a 36-37-0-1 record, which was good for 79 points. They missed the playoffs for the 2nd time in franchise history. The Islanders, on the other hand, had a very good regular season. They went 40-30-0-12 and slid into the last playoff spot. After the season, Marshall was fired, and Snow hired his Assistant Jack Capuano as the next head coach of the Sound Tigers. “Cappy” would become the Islanders Head Coach in 2010. He would be the coach until 2017.

So, that is the story that no one knows about. It was a simple decision in Bridgeport that led to Garth Snow being GM. Many crazy things have happened since: Snow signed a mysterious contract extension that fans do not know the value or term length of, he has let long-time players walk, and has had billboards made calling for his firing. Maybe if a different coach was hired in Bridgeport, none of this would have happened…