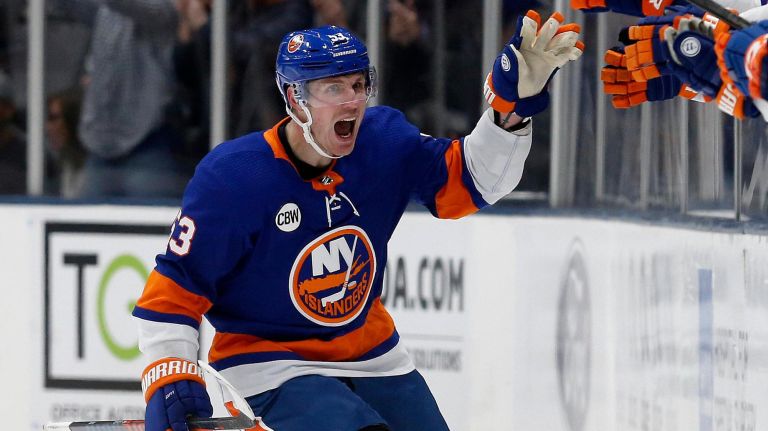 Before this season, Scott Mayfield was coming off of a career year after being paired with Devon Toews. Mayfield was one of the many defensemen who blossomed under Barry Trotz’s coaching last season, especially on the defensive side of the puck.

The St. Louis native put up 19 points and a +18 rating last year. While +/- can be a flawed statistic, +18 is extremely high for a single season and it proves that good things generally happen when Mayfield is on the ice. This campaign, Mayfield played 67 out of 68 games, and has earned Trotz’s trust on defense as he has consistently been a top-four defenseman over the last two seasons.

Scott Mayfield fits perfectly into the Islanders’ defensive system. Like Adam Pelech, Mayfield is an excellent shutdown defender. Mayfield does the little things right, such as maintaining gap control, clearing the crease, sliding to block passes and shots and executing reversal breakouts. It is the small things that he has done for the majority of the season that may go unnoticed to some, but make him such a solid defender.

At a towering 6’5″ and 223 pounds, Mayfield has also been very physical. With a tough fourth line and gritty lineup, the Islanders led the NHL in hitting this season. Mayfield, with 93, was a big part of the reason why. He had 118 hits last season, and has been consistently physical with Trotz as coach.

Once Adam Pelech went down, the entire Islanders defense, including Mayfield, began to look discombobulated. Mayfield was missing more defensive assignments as the season progressed, physicality decreased and decision making got significantly worse.

For example, on some situations where Mayfield would usually hold the line, he took a risky pinch instead that could potentially lead to odd-man rushes. While the Islanders have struggled to find offense and it can be frustrating, conservative defensive play, especially out of a player such as Mayfield, should come first. There were times in the final weeks of the season where Mayfield left men open in the slot at higher rates than usual, and that was quite unlike him.

After a stellar 2018-19 campaign, the expectations for Mayfield this season were to essentially repeat last year’s play and make it consistent. Mayfield fits into the Islanders system as a physical, stay-at-home defenseman, and that is what his particular job is for the larger unit. Mayfield did this job wonderfully in the 2018-19 season, and the expectation was continued defensive excellence as a result.

The Moment of the Season:

In an early season battle between the Florida Panthers and the New York Islanders, Scott Mayfield scored what would eventually be the game-winning goal, the only game-winner in his NHL career thus far.

In the 12th game of a 17-game point streak, the Islanders edged out the Panthers by a score of 2-1 in a matinee at Barclays Center. With 13:48 remaining in the third period, Aleksander Barkov slammed home a power play goal to tie the game at one. Just 38 seconds later, Mayfield put the Islanders back on top.

Mathew Barzal skated the puck out of the corner and landed a beautiful saucer pass on the stick of Devon Toews at the left point. He sent the puck across for Mayfield, who began curling it down the wall and threw it toward the net in a massive cluster in front of the net. It bounced off of multiple Panthers and past Sergei Bobrovsky, who did not have much of a chance stopping such an unpredictable shot.

While it was not a highlight-reel goal by any means, Mayfield made a smart play by throwing the puck on the net and got rewarded for it, continuing the Islanders long point streak.

Despite struggling near the end of the season, Mayfield was still a solid defensive presence for the majority of the season, and was everything Islander fans could have asked for.